It Began With a Dream III 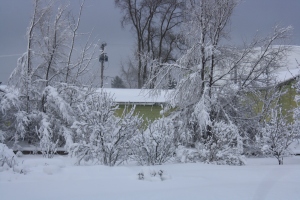 Peter looked around to make sure no one was watching.  “I heard them last night.”  He waved his hand at her.  “Of course, I know they talk every night, but this time, this time it was you.”

Nadalia gasped and covered her mouth with her hand.  Nightly, the soldiers spoke of who would be next, of who would have the privilege of going to the Palace.  It was supposed to be a privilege  but whispers in the night had told them many times that it was very dangerous.  No one came back from the Palace, ever.  To go to the Palace was really a death sentence.

Nadalia’s mind race.  She tried to think of what she had done that could have given her this death sentence.  Going to the Palace meant that she had offended a guard, broken a rule, or  done something that wasn’t considered appropriate.  The guards of course would never admit to punishment, but their idea of privilege was a beating, jail, and death.  It wasn’t privilege at all, but a ruse to get the children and teens to quietly go with them.

“You must get out, Nadie, tonight!”  He spoke in a harsh whisper.

“Then I will find you, I will get out too, but you must go on your own for now.  I would only slow you down with my leg.  But I will find a way to get out.  They will not suspect me for telling you, and even if they do, I have favor with Guard Rouso for saving his sons life, so they will not harm me for now.”

Nadalia remembered the day all too well.  The small boy, son of one of the guards, had run out in front of a horse pulling a carriage.  Guard Rouso could not get there in time, but Peter saw and ran for the small child.  He pushed the boy out of the way and took the brunt of the wagon himself.  He saved Rouso’s son, but in return, he would never walk right again.

Nadalia burst into tears.  “Oh Peter!  I can’t leave you!”

Peter wrapped his arms around her to comfort her.  “There, there.  It’s ok Nadie.  Go now, quickly, before morning classes start.  I can tell the professors you were being punished and had to clean up from breakfast.  That should give you a good two hours, and by the time they realize you are gone, you can be safely away from here.”

Peter pushed her back and shook his head.  “No, not goodbye.  I’ll see you later, my love.”

Nadalia nodded, and Peter released her.  She stood from the table and headed out as if she was going to the restroom.  Once in the hallway, she looked both ways for guards.  They were all busy dismissing students to their classroom.  She hurried down the hallways and out the back door.  There wasn’t time to loose.

4 responses to “It Began With a Dream III”