15-minute free write on a snowstorm. 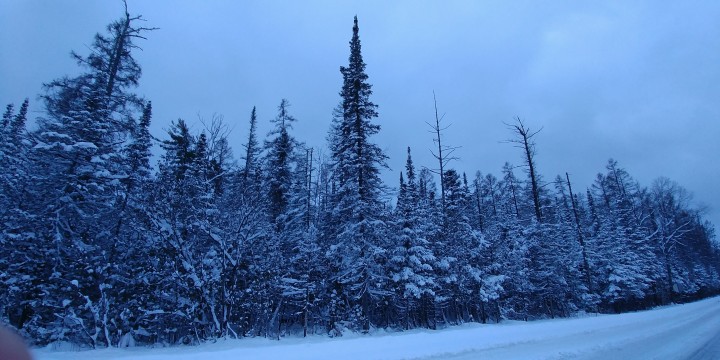 We drove along the slippery road until finally, Eavon pulled over to take a picture.  I was glad there was no one behind us.  The trees were beautiful with the fresh fallen snow, but Eavon didn’t exactly chose the safest places to stop and take photos.  We were in the middle of a pretty big snowstorm and he was lucky it had let up a little bit.

When his picture was taken, we drove on in silence.  I was still angry with him for insisting we go on despite the weather, and he was not happy with me for taking so long to get ready.  He wanted to arrive at our destination on time; I just wanted to stay where we were safe and warm.

An hour or so into our journey, the roads seemed to be getting worse and the snow was coming down harder.  Evan finally broke the silence between us.  “I wish you’d gotten ready faster, Winnie.”  I ignored him, staring out the passenger window.  “We should be there by now.”

“Or we could be home, safe right now.”

“I told you, our home is elsewhere now.  Do not argue with me, woman.”

It was his turn to laugh.  “No you won’t, we’re in the middle of a snowstorm, going down the road.”

“Watch me.”  I opened the car door and grabbed for my seatbelt.  He swerved, then reached for me while he kept one hand on the wheel.

“Well, I”m not staying here with you when you act like that.”  I reached for the door and pulled it shut, then re-buckled my seatbelt.  He had the idea that I was serious at least.

“All right, you win.  We can go back ‘home.'”  He said home in a sarcastic voice and I knew it was no longer home to him.

“No, we’re already well on our way now.  I just wish we could have talked about it more.”

“No, you talked.  I tried to listen, but you wouldn’t listen to me.”

“Look, Winnie, this is what is best.  Kalkaska just isn’t our home anymore, it’s time we headed elsewhere.”

“Well I don’t agree, but you haven’t really listened to me, now have you?”  I folded my arms across my chest.

He took a deep breath and I could hear him sigh heavily.  “Look, I made a decision I thought was best for our family.  It will all work out, you’ll see.  Just trust me.”  I rolled my eyes and looked out the window again.  This wasn’t what I wanted, but I was going to have to get used to the idea.

I am a Special Education teacher living the beauty of north-west Michigan. I love to write, read books, use the computer, and play a little bit of piano and guitar. I also enjoy photography. View all posts by Cindy Flynn

Watch for more content on our posts, coming soon!

Find a story, poem or other writing